Register to watch our Webinar here. 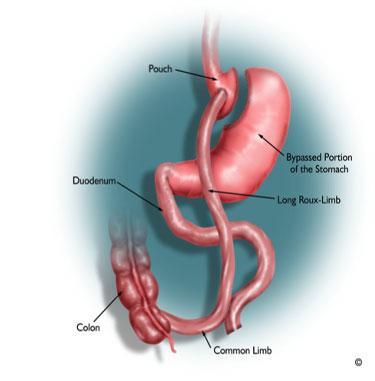 Roux-en-Y Gastric Bypass Surgery is a Restrictive and Malabsorptive Procedure. According to two organizations, the American Society for Metabolic and Bariatric Surgery and the National Institute of Diabetes and Digestive and Kidney Diseases, Roux-en-Y (pronounced ROO-en-why) gastric bypass surgery is still one of the most popular bariatric surgeries in the United States.

This procedure should strongly be considered as an option in morbidly obese patients who suffer from chronic gastric reflux, Barrett’s esophagus, diabetic patients, and those who consider themselves as “sweet eaters”.

A 2004 meta-analysis of more than 22,000 patients showed that those who underwent a bariatric surgical procedure experienced complete resolution or improvement of their co-morbid conditions including diabetes, hyperlipidemia, hypertension, and obstructive sleep apnea.